Messara Museum, Gortyna. Stella Mandalaki (ΚΓ’ ΕΠΚΑ) reports on discoveries made during the construction of the new Messara Museum. Of particular interest was the area NW of the planned museum, where ancient walls extend to the S. Ancient structures had previously been discovered here in 2000.

In the above-mentioned section, excavation works proceeded 2.60m–3.50m deep to the N and 1.30–1.60m to the S. The surface area was cleaned, and excavation proceeded in May/June 2013, bringing to light a corridor, paved floor and complex of rooms fo the late Hellenistic period, as well as a wall of the Geometric period (Fig. 1,2,3).

The corridor was found to survive at a length 24.30m (Fig. 4), consisting of two parallels walls running NS. The width of the corridor varies, increasing from 1.90m at the S end to 2.10m at the N. The walls were made of small and medium sized stones, generally preserved to a height 0.7-0.75m (E side) and 0.50–0.6m (W side), (Fig. 5). There is probably an older wall that was integrated into this structure.

The floor consists of small stones, gravel and sherds (Fig. 6). In the S part, it is paved, with a few slabs surviving (Fig. 7). The corridor had an uphill slope to the N, and during a late Hellenistic phase it was covered with a layer of small rough stones.

Concerning the complex of rooms at the N end of the long corridor, walls from two rooms are preserved at the height of the foundation walls (Fig. 8). Room 1 has dimensions 2 x 2.40m, with a possible entrance from the N (the N wall is not preserved). Inside Room 1, a small head of a figurine was found of a female wearing a veil, as well as part of a basin in the centre of the room (Fig. 9) and lots of Hellenistic pottery.

Room 2 was located W of Room 1, with dimensions 2 x 2m. The entrance was from the N and the floor paved with slabs. The elongated corridor ended at this room, which was probably the vestibule of the complex and communicated directly with Room 1. The paving is preserved in fragments, and appears to have covered an area 6 x 9 m, consisting of small and medium-sized pieces of limestone. In the S part, a pipeline was discovered that had been integrated into the room in a second construction phase. Lots of loom weights were found in this area.

At the S end fo the W wall fo the corridor, a stone square construction was found with a stone floor (Fig. 10), from which much pottery of the Hellenistic period was collected. Two additional Hellenistic walls were found in the S part of the excavation.

An EW wall south of the long corridor is dated to the geometric period (Fig. 10), rebuilt during the Hellenistic period. It was elaborately constructed of medium sized sonnets and preserved to a height of 0.70–0.80m. It is thought to be a retaining wall, holding the slope that created a terrace. This hypothesis is supported by the fact that the wall does not have a dressed facade on the N side (Fig. 11).

The excavators postulate whether this space was an open-air sanctuary, perhaps dedicated to the Great Mother Goddess.

Fig. 1/ Plan of the excavation from an orthophoto Fig. 2/ General view of the excavation from N looking S 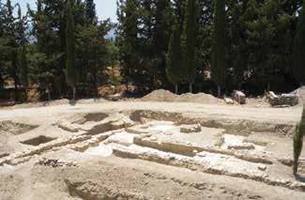 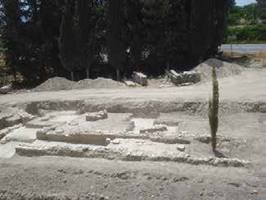 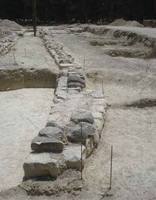 Fig. 5/ The curved end of the elongated corridor to N, at the entrance to the complex of rooms 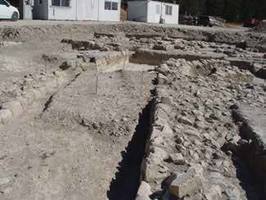 Fig. 6/ The floor of the elongated corridor to N 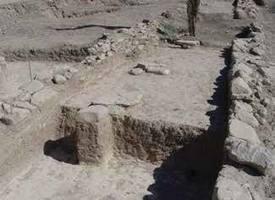 Fig. 7/ Stone slabs at the S end of the long corridor 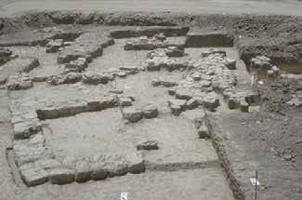 Fig. 8/ The complex of rooms 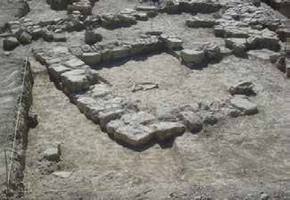 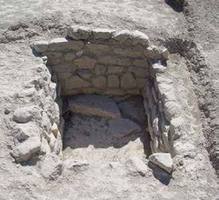 Fig. 10/ Stone square construction at the S end of the long corridor 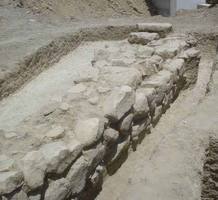 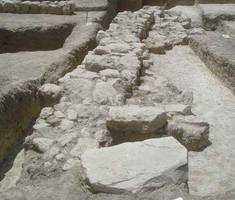 Fig. 12/ The N side of the Geometric period retaining wall