A long trench was laid EW in the area to the E of the trench to ascertain the boundaries of the structure’s enclosure, and to locate a possible second boundary wall. In the W part of the section a square pillar was found (Fig. 1), 2.1 x 2m, attesting to the continuation of the enclosure wall. Above the pillar, two layers of early Christian pottery were found, 0.40m thick. They appear to be related to a ceramic kiln (Fig. 2) found in 2011. E of the pillar, another kiln was excavated, 2 x 1.94m (Fig. 3). It comprises a built construction with walls 0.30–0.40m, and lined with clay. In the S part of the construction, an opening was found with traces of burning. It appears to date to the second / third century AD, based on Roman pottery collected. This appears to date activity in the theatre, which is significant as in the western wall the kiln overlies a square pillar, thus disrupting the perimeter boundary and indicating abandonment of the theatre in the middle Roman period.

Further excavation in the spaces between buttresses yielded pottery of the fifth and sixth centuries AD. These were coarse ceramics, mainly amphoras. A ‘Cretan type’ lamp of the first century AD (Fig. 4) was also found.

Inside the structure, the natural rock that had been incorporated to the S end was revealed. In the S part of the orchestra, four architectural members were identified and removed (three parts of the entablature and parts of a column) (Fig. 5), originating from the superstructure of the stage. The floor of the orchestra was identified. Within the orchestra, towards the centre, a destruction deposit was revealed, around 0.60m (Fig. 7), with several carved structures in it probably from stone benches. This layer was not excavated.

Conservation works of the theatre then followed from November 2013. Fig. 1/ Foundation layer of the enclosure 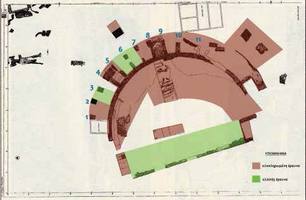 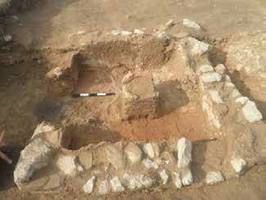 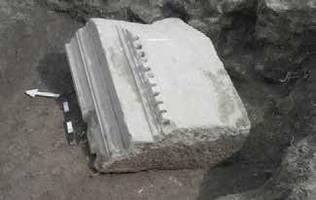 Fig. 5/ Stone architectural member from the superstructure of the stage