Ancient Theatre of Ierapetra. Chryssa Sofianou (ΚΔ’ ΕΠΚΑ) reports on first exploratory excavations on the ancient theatre of Ierapetra. The site was cleaned and surface ceramics were collected, after which the first trenches were laid. The whole theatre is under large deposits of modern material, 1.5–2m beneath the surface. Structures were probably covered with marble slabs which were found during cleaning of the site (Fig. 1). 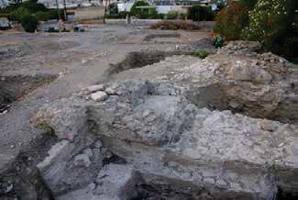