Key-words
Tomb - Tools/weapons - Metal - Stone - Domestic space - Building Type - Find Type - Material Type - Site Type
Type of Operation
Excavation - Research excavation
Institution
National Archaeological Museum
Toponym
Amigdalia
Linked Record
2009
Report
Mygdalia. L. Papazoglou-Manioudaki (National Archaeological Museum) reports on the second season of excavation at the Mycenaean settlement in 2009.
Mygdalia is a naturally fortified hill bordered to the east and west by the rivers Philiouras and Xeropotamos (Fig. 1). Previous discoveries include Geometric pithos burials and a LHIIB−IIIA1 tholos on the west slope of the hill. Mycenaean cemeteries are known immediately to the east at Koukouri (Achaia Clauss) and the west at Krini.
Settlement covers ca. 6,500m2 over three terraces (Fig. 2). Terrace 3 is supported from the southeast by a wall of large roughly-cut stones, now partly covered by a dry-stone wall (Fig. 3). Parts of two earlier retaining walls lie beneath it. Sixty metres away on the southwest slope is a collapsed apsidal built grave (Fig. 4). Only tiny sherds and animal bones were found in the mixed fill partly covering it: stones from the tumulus are visible outside.
The settlement spans the Early Mycenaean to the end of LHIIIC. Surface finds on terrace 2 include part of a LHIIIC bovine figurine with linear decoration (Fig. 5). A strong exterior wall, incorporating huge boulders, had collapsed in an earthquake: sherds in the fill include LHIIIB and C deep bowls. A pithos in front of the house entrance, plus LHIIICL sherds, date the final destruction and abandonment of the building. Fill inside a large room contained mixed Early to Late Mycenaean sherds, but the floor layers date to Early Mycenaean. Finds include a stone axe-hammer (Fig. 6). Another wall of thin, almost rectangular, stones defines a semi-open space to the south of the building where the cutting back of the bedrock may denote a small courtyard. Abundant transitional MH/LHI domestic pottery in foundation strata, including matt-painted stemmed goblets and amphora handles, dates the construction to the Early Mycenaean period: it remained in use over a long period. A small steatite disc may have been a balance weight or a game piece.
Another building inside a strong retaining wall lay 1.5m to the east. Both structures follow the northwest-southeast orientation of the building(s) excavated in 2008. Inside, over the dirt floor, was a LHIIICL destruction deposit containing stones, pithos and domestic ware sherds, a bronze knife, spools, spindle-whorls, loomweights, whetstones and animal bones. The absence of burning or any other sign of violence suggests that the building was abandoned voluntarily or after an earthquake. The building had two main rooms (Fig. 7): the north remained unexcavated but the south was further divided into two by a new cross wall. A handmade cooking jug (Fig. 8) and a pithoid jar were found in situ. Pottery dates mainly to the Early Mycenaean. Finally, Late Geometric sherds (including a pyxis) were found in a trench dug into the building in the eighth century BC.
Excavation on the summit exposed three rounded stone column bases (two of which were in situ). (Fig. 9). A number of large, roughly rectangular, stone slabs may belong to a portico or a colonnade. To the northwest were the foundations of a prominent rectangular building (Fig. 10): in the middle of one of the rooms is a flattened stone which may have supported a wooden column. The date of the complex remains unclear (the few sherds collected span the Mycenaean to Geometric period). A few Archaic tile fragments were found nearby on terrace 1 during the 2008 survey.
Author
Catherine MORGAN
Bibliographic reference(s)
Unpublished field report, L. Papazoglou-Manioudaki.
Date of creation
2010-12-09 00:00:00
Last modification
2018-08-22 09:24:33
Picture(s) 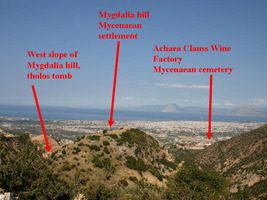 Fig. 1/ Mygdalia hill from the south. In the background the city of Patras and the sea.

Fig. 2/ Topographic map of the Mygdalia hill marking the three terraces and the excavation grid. 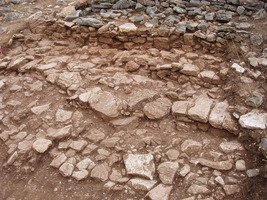 Fig. 3/ Mygdalia hill. The defensive- retaining wall (s) of Terrace 3 from the south. 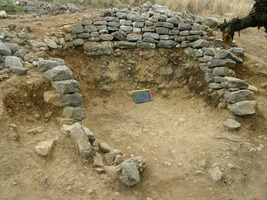 Fig. 4/ Mygdalia hill. The apsidal tomb on the west slope. 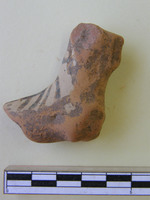 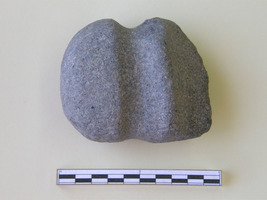 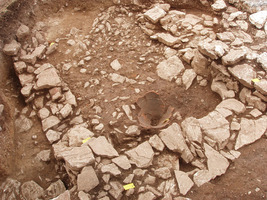 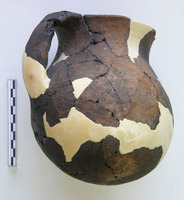 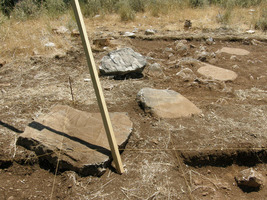 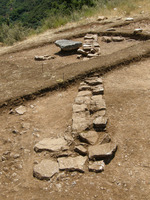