Toponym
Kissamos, Kastellion
Linked Record
2009
Report
Property of Sampsaki-Andreou (Fig. 1,2), Kastelli, Kissamos. Nektarios O. Paterakis (ΚΕ’ ΕΠΚΑ) reports that during 2009, the salvage excavations continued in Kissamos, Chania. South of the town, the remains of two Roman buildings as well as drains of the Roman occupation and of the Early Byzantine period were discovered at the property of Sampsaki-Andreou. The Ephorate conducted works SE of the Sampsaki-Andreou house between May and September, based on the plan to determine the limits of the Roman bath (balneum/βαλανείον) that was found in 2002. North of the balneum, two praefurnia, the rooms for the tepid and cold bath, a large cistern, as well as smaller spaces in the S were found. The complex seems to expand towards the E, under an illegally erected building, and its excavation has been scheduled. A temporary shelter for the protection of the remains was built in December. 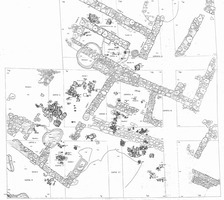