Toponym
Aptera
Linked Record
2009
Report
Aptera, central entrance of the ancient city. Vana Niniou-Kindeli (ΚΕ’ ΕΠΚΑ) reports that archaeological works took place between 2008 and 2009 for the study and promotion of the central entrance of ancient Aptera, in the framework of the third ΚΠΣ . The prospect of unification between this project and the projects that were part of the second and third Γ΄ΚΠΣ-ΠΕΠ of Crete, S of the same site (Fig. 1)  should be noted. From the main entrance of the city, the fortification tower (Tower 2), which was part of the W gate (Fig. 1,2)  is preserved.

For the purposes of the project, trenches were opened in the W, S and E sides of the tower (Fig. 2,3).  The square Tower 2 (7.80 m. height so far-the excavation has not finished yet) bears cracks on the W side (Fig. 4).  These trenches brought to light layers of the battles of the Hellenistic period as well as the stone bullets  that collided on the tower. Wear evidence were also discovered on the S and E side. Another trench was opened in order to determine in which depth the ancient road is located in this area. The pivot of the entrance door was discovered in the NW corner of the tower. The area towards the A was investigated in order to find the continuation of the fortification. Further, more systematic research for the uncovering of the extension of this part of the fortification is needed. 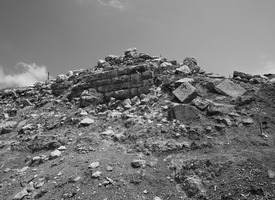 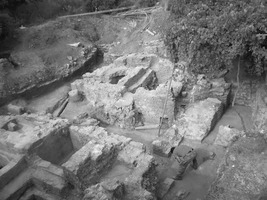