Key-words
Well - Tools/weapons - Metal - Hydraulic installation - Production/extraction site - Sanctuary - Find Type - Material Type - Building Type - Site Type
Type of Operation
Excavation - Research excavation
Institution
Deutsches Archäologisches Institut
Toponym
Archaia Olympia
Linked Record
1991199219931994199519971999 (1)199920002002200420052007200820092010201120122013201420152020
Report
Olympia, Sanctuary of Zeus. R. Senff (DAI) reports on continuing excavation in the southeast complex and geophysical survey in the area of the ancient hippodrome, undertaken in 2009.
In the so-called southeast complex (Fig. 1), the ancient layers immediately adjacent to the external wall were well preserved, had not been washed away by the river and extended east at increasing depth, their slope indicating a shoreline escarpment. The wall, of rough limestone blocks and large river pebbles, shows several building phases. Excavation halted ca. 2m below the surface due to the unusually high water table, although pottery and metal objects indicate that stereo was not reached. There may be an infilled well in the northern half of the sounding, as the area contained a near complete Late Archaic kylix and a complete bronze cauldron lying upside down. Upon restoration, the cauldron proved to contain a bronze Corinthian helmet with deliberately bent cheek-guards (Fig. 2).
In sounding Q 08.3, fifth-century BC layers contained fineware and coarseware sherds, as well as many bones, scorched tile fragments and metal objects. The debris covered a large, shallow basin-like pit, its walls reinforced with broken tile and covered with a reddish lime mortar, which may be connected with building work or a potter’s workshop (Fig. 3).
Geophysical survey south and east of the stadium was continued, with the additional use of geoelectrics. The visible structures cannot securely be connected with any ancient remains. Five test trenches dug in the locations of anomalies noted in 2008 revealed only natural soil and gravel layers. The exact position and shape of the hippodrome therefore remain unclear. Further profiles were measured south of the Leonidaion, where the agora may be located according to Pausanias. Scant indications of ancient building remains were found. Further evidence of architecture was encountered on the slopes of the Kronion, northeast of the gymnasion.
A project to re-erect the north column of the Ptolemaic dedication in front of the Echo Hall was begun in 2009. Specialist reports were completed, and first samples for the cleaning of stones and plaster casts of the broken surfaces on the column drums taken.
Author
Catherine MORGAN
Bibliographic reference(s)
Unpublished field report, DAI
Date of creation
2010-12-09 00:00:00
Last modification
2018-08-22 09:24:33
Picture(s) 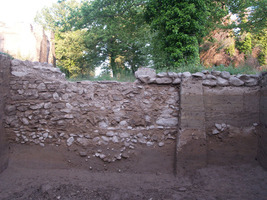 Fig. 1/ Olympia, Sanctuary of Zeus: extension of the southeast complex. 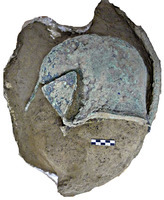 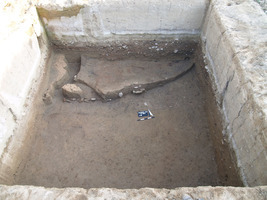