In this area, four trenches were unified, while after the removal of the top, modern layers, the ancient ones became visible approximately at 1 m from the surface, mainly containing Hellenistic pottery. Two walls, 1 and 2, with the latter being of lower quality, defined an earthen road (1-1.10 m. wide, NW-SE) (Fig. 1,2). Based on the pottery, the road dates to the Hellenistic period.

An older wall (Wall 6) was also discovered N of Wall 1, while part of a bell-shaped beehive and an one-handled spherical cooking pot of the 5th c. B.C were unearthed (Fig. 3). The cooking pot contained small bones, probably of a newborn or premature infant (according to osteoarchaeologist C. Bourbou). Although the rest of the area was not investigated, it seems that it has been used as a cemetery during the Classical- Early Hellenistic period. The use of the space changed later, and various buildings were erected.

South of Wall 2 (Trenches 7-8), parts of three walls (3-5) and of an earthen floor with slabs in some spots (Floor 1) were unearthed as well. The extended destruction layer of this area contained many small crude stones as well as pithoi fragments. Two Early Hellenistic unguentaria were also found, while the pottery of the rest of the layers dates up to the Archaic period. The investigation stopped at 2.05 m., however the antiquities seem to go deeper.

In this side, an area of 42 square meters was excavated. Here, as in the E part of the Stadium that was excavated during 2005, part of an ancient cemetery was found. Nine burials and 22 vessels for pithos burials were discovered inside a thick layer of sand (Fig. 4,5). The skeletons of the adults were laying directly on the sand, with the skulls facing S or SW, and were mainly buried without grave goods. Only an unguentarium, parts of three female figurines as well as an iron knife and a grinder were found. All the vessels, apart from a beehive, were pointed amphorae, from which the upper part was mostly missing, or they had a large opening at their bodies. Most of them were broken and contained small bones, probably of infants.  The vessels and grave goods date to the Early Hellenistic period.

Due to safety reasons the excavation had to stop in this area; however the burials seem to continue in deeper layers. 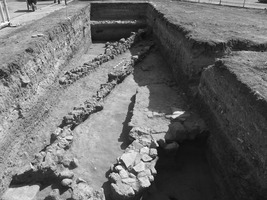 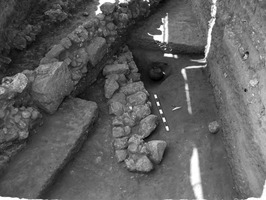 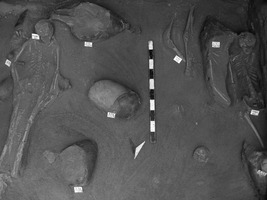 Fig. 4/ In situ burials at the NE part of the Stadium