Key-words
Domestic space - Territory - Site Type
Type of Operation
Survey
Institution
DAI
Toponym
Kakovatos
Linked Record
20092010
Report
Kakovatos. B. Eder (DAI/Freiburg) reports on the first season of renewed fieldwork in 2009, to investigate the spatial extent, building types and chronological span of the Mycenaean settlement on the so-called acropolis (Fig. 1).
A geodetic study produced a topographic plan of the Kakovatos area and a terrain model of the archaeological zone (Fig. 2). Geophysical survey aimed both to find evidence for ancient structures and to trace the areas excavated by Dörpfeld in 1907−1908. A geomagnetic survey was made of the entire archaeological zone, with geoelectric tomographic sections, mapping and 3-D tomography then applied in selected areas. Ancient structures appear to be concentrated on the acropolis, with anomalies observed especially in the west part of the plateau (the location of walls M and N partially excavated by Dörpfeld). No evidence for ancient buildings was observed in the east of the acropolis or further downhill.
Built structures were documented and systematic fieldwalking of the acropolis and its surroundings undertaken. Walls M and N on the acropolis were cleaned and recorded (Fig. 3). The densest concentration of finds was in the west of the acropolis plateau, and, in general, the find distribution on the hill and its surroundings coincides with the results of the geophysical survey.
The pottery, which continues from the Middle Bronze Age via Early Mycenaean to the Early Palatial period (LHIIIA), indicates a comparatively long occupation of the acropolis, covering a much broader spectrum than the finds from the tholos tombs.
Author
Catherine MORGAN
Bibliographic reference(s)
Unpublished field report, DAI (B. Eder)
Date of creation
2010-12-08 00:00:00
Last modification
2018-08-22 09:24:33
Picture(s) 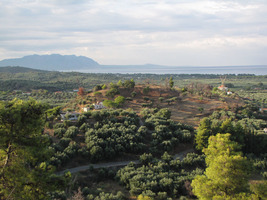 Fig. 1/ Kakovatos: the location of the hill. 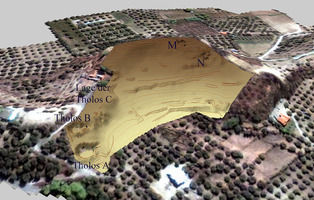 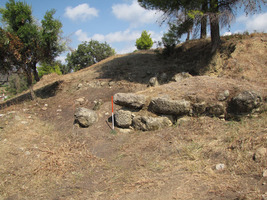 Fig. 3/ Kakovatos: wall N on the western part of the acropolis (from the west).