Key-words
Tomb - Numismatics - Tools/weapons - Metal - Stone - Production/extraction site
Type of Operation
Excavation - Rescue excavation
Institution
Ministry of Culture and Tourism, Δ' ΕΠΚΑ
Toponym
Argos
Linked Record
2000
Report
Argos, P. Marinou Street (Th. Apostolopoulou property). O. Psychoyiou (Δ' ΕΠΚΑ) reports the excavation of a Hellenistic to Roman weaver’s workshop on the northeast side of Ag. Petros Square, outside the ancient city walls (Figs 1-2). This plot lies immediately north of the property of Ch. and G. Bousi where part of a late fourth/early third-century BC to first-century AD street was previously discovered (ADelt 47 [1992] Chr, 85−86).
The complex had at least three Hellenistic to Early Roman phases: a pebble pavement of an exterior courtyard was largely excavated and the neighbouring spaces partially explored. The earliest, fourth-century BC, building was founded in riverine deposits containing much Geometric and Archaic pottery. Remains comprise an early phase of the paved court and, on its north side, a semi-open space beside a gravel floor. To the northeast, the pavement connects with a semi-basement room reached by steps in the north wall (fig. 3). This room contained much household pottery, millstones and stone tools, slag and charcoal, shellfish, fragments of terracotta figurines, coins and a variety of metal objects. In the western part of the plot was an enchytrismos of an infant in a Hellenistic skyphos.
During the second phase, the pebble paving again borders semi-basement rooms to the north and west. Two kilns on the northwest side of the excavation area also date to this phase. During the third phase (second century BC), the pebble pavement was relaid: in places it suffered later damage and parts of the surface were replaced with worked slabs. One group of six such slabs set in waterproof cement likely relates to an ancient well or cistern: a terracotta water channel runs from the east end of these slabs to join another conduit continuing east beyond the excavation area. To the north is a long, partially-roofed space (area 2) with many tile fragments on its clay floor: a stone wall or barrier divides it from the paved court. A probable door in its north wall leads into another room further north with a clay floor and a semicircular hearth. A further building of the third phase of construction continues into the neighbouring plots on the south and west (only the southeast portion of the north room is preserved, with a schist-paved floor). The corner of a building traced in the northwest corner of the excavation may belong to its extension, but in general the area is too disturbed to assess the relationship between the semi-roofed area and subsequent constructions, although spolia indicate continuous use of the area.
Portable finds include some 190 loomweights of different shapes and sizes, found mainly in the semi-roofed area, as well as spools, bronze coins, a variety of metal objects, sherds of relief bowls and terracotta figurines.
Author
Catherine MORGAN
Bibliographic reference(s)
ADelt 55 (2000) Chr, 178−81
Date of creation
2010-11-27 00:00:00
Last modification
2020-03-31 08:16:51
Picture(s) 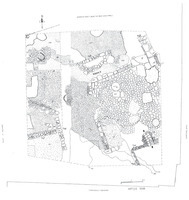 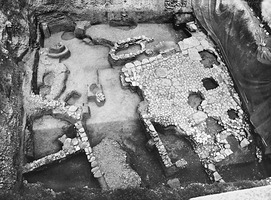 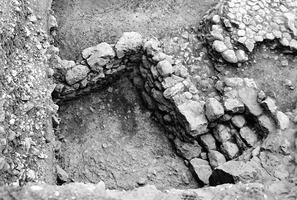