Key-words
Peribolos - Tomb - Figurine - Dress and personal ornament - Cemetery - Road system/waterway
Type of Operation
Excavation - Rescue excavation
Institution
Ministry of Culture and Tourism, Δ' ΕΠΚΑ
Toponym
Argos
Linked Record
2000
Report
Argos, E. Roussou Street (M. Rapti and G. Apostolou property). E. Sarri (Δ' ΕΠΚΑ) reports on excavation just south of the Capodistrian barracks (Fig. 1).
Successive Hellenistic and Roman phases of a cobbled road with a system of water channels were revealed in the northwest of the plot. Below, a third road was bounded by two walls and a limestone Π-shaped peribolos of the second half of the second century BC. A fourth, deeper, road on the same orientation abuts a construction to the south which was destroyed by the retaining walls of the overlying road.
Two groups of Classical and Hellenistic tombs lie beneath the level of the Π-shaped peribolos. The first group, towards the centre of the plot, consists of two cists (I and III) and a sarcophagus (II) oriented east-west and with cover slabs: all are family tombs.
Tomb I contained two burials oriented east-west, with imported pottery dated ca. 490−470 BC. Attic vessels comprise a black-glazed pinch-base cup-skyphos with a chariot scene, a floral palmette lekythos by the Megaira Painter, a black-figure chimney lekythos depicting Athena and a chariot, a band cup with riders, a shallow skyphos with satyrs, a floral band cup, a lekythos of the Class of Athens 581 I (Fig. 2) and three black-glazed Type C cups. Corinthian imports are a globular pyxis and lid, a skyphos and a thilastron.
Tomb III contained two burials as above. Offerings comprise a black-glazed skyphos with stamp decoration (second quarter of the fourth century), a squat lekythos with impressed floral decoration, five figurines (mostly Argive peplophoroi), a Corinthian pyxis lid and a black-glazed cup-skyphos with stamped decoration (first quarter of the fourth century), three Argive pyxides, a squat lekythos and three bolsals.
Tomb II, a sarcophagus (with the raised head-rest characteristic of local tombs of the first half of the third century) contained a female interment, plus the displaced remains of two earlier burials. Offerings in the last burial were a bronze mirror and lid (Fig. 3), and three Argive alabastra (plus a fourth from an earlier burial) deliberately broken and placed in different parts of the sarcophagus. Between the bones of the earlier burials was an unguentarium of the first half of the third century. Two Argive handmade figurines on the floor of the sarcophagus should also be associated with these burials.
Between tombs I and III was a disturbed female burial of the second half of the fifth century, close to which lay the disc of a bronze mirror, five Attic vessels (a Type B Glaux skyphos, a floral palmette lekythos, a black-glazed kylix of the Acropolis Group, a Cracow Class cup-skyphos and a Corinthian-type skyphos) and three Corinthian (two globular white-style pyxides with lids, and a skyphos).
Tomb II disturbed two burials set partially under the peribolos. One, to the west, contained a bronze strigil, two handmade Argive figurines (a dove and a horse and rider) and a miniature kotyle. Pottery from the same layer includes two intact lids, a small Argive skyphos, part of a Vrysoula Workshop globular pyxis of the third quarter of the fifth century, black-glazed pottery of the same period (two Attic skyphoi of Corinthian type, an Attic one-handler, a kylix and Rheneia cup, and an Argive kylix) and seven Attic Vicups. The second tomb lay to the northeast, within a layer containing Middle Corinthian to LCor I pottery, including an amphora, a white-style globular pyxis and part of a kylix.
West of this group, tile grave IV contained a skeleton oriented north-south, beneath which were iron nails; Late Geometric to Archaic sherds and an Archaic Argive kantharos lay above the cover tiles. Pit grave IX, covered with two rough limestone slabs, contained a skeleton oriented north-south.
The second tomb group, in the eastern part of the plot, contained four limestone cists oriented north-south. Their long sides were monolithic. Only the northern part of tomb V and the southern part of tomb VII were preserved: both had been robbed (V contained a little bone and many Hellenistic sherds). Tombs VI and VIII mostly fell within the neighbouring plot.
The earliest remains discovered are the cist graves XI and XII (oriented east-west) and pithos burial X (oriented north-south). Tomb X contained a single burial without goods. Tomb XI contained a few bones plus fragments of four Geometric kyathoi. Tomb XII was damaged by the digger, but by its side were a Late Geometric krater of the Fence Workshop (Fig. 4 and a contemporary kantharos. Many Late Geometric sherds were collected in the course of cleaning this side of the tomb, including fragments of two kraters, an amphora and an oinochoe.
Author
Catherine MORGAN
Bibliographic reference(s)
ADelt 55 (2000) Chr, 174−78
Date of creation
2010-11-27 00:00:00
Last modification
2020-03-30 15:37:17
Picture(s) 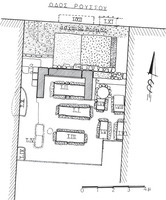 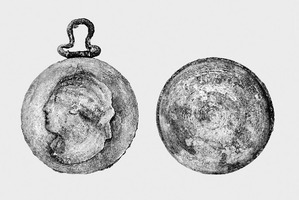 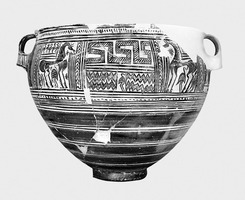