Key-words
Altar - Peribolos - Tomb - Figurine - Tools/weapons - Bone - Religious building - Sanctuary
Type of Operation
Excavation - Rescue excavation
Institution
Ministry of Culture and Tourism, Δ' ΕΠΚΑ
Toponym
Argos
Linked Record
2000
Report
Argos, Papanikolaou Street (G. Rebelou property). K. Barakari-Gleni (Δ' ΕΠΚΑ) reports the completion in 1999−2000 of the excavation of a shrine area begun in 1998 (see previously ADelt 53 [1998] Chr, 125−28). Fig. 1.
East of the central open area, a votive deposit outside and along the west side of area A contained some 30 Archaic offerings − figurines, spools, a terracotta bead and pottery (kraters, skyphoi and votive miniatures). To the south, a small pit covered with stones contained animal bones and strong traces of burning. In the southern part of the central open area, an altar (0.4−0.42m in diameter) cut into a clay platform contained burnt organic material, figurines and miniature vessels (Fig. 2).
In area B (Fig. 3), west of the central open area, a round pit contained sherds of large Late Geometric and Argive monochrome vessels, animal bones and evidence of burning. Two votive deposits contained figurines and traces of burning. At the west of the plot were two tile-covered graves which probably held child burials, as well as further walls. Levels corresponding to those in the central area and area B produced Attic black-glazed and Corinthian sherds (including one semi-restorable amphora of late fifth- to early fourth-century type), loomweights, spools and a bronze arrowhead.
Southeast of area A, in the middle of the eastern side of the excavation area, a Geometric tomb lay beneath a tumulus with a double peribolos wall of river stones and a pebble floor (Fig. 4). The tomb (oriented east-west) contained Geometric pottery, traces of burning and bone. Sherds of a figured LGII krater were collected from the east side of the tumulus. A post-Byzantine wall, built of stones from the tumulus, abuts it on the east side. Northeast of the tumulus, a semicircular structure of worked limestone blocks (0.95m in diameter, 0.45m deep) again incorporates stones probably from the tumulus in its lowest course: figurine fragments and burnt material were found between the blocks. In a deeper level were sherds of sixth- and fifth-century pithoi and lekanes, bones and traces of burning.
North of the tumulus was a votive deposit of the Hellenistic period. In the northeastern section were two enchytrismoi of infants, one in an Archaic vessel and the other in a Geometric krater. Southwest of these burials, roughly worked stones covered a pit (1m in diameter, at least 2.9m deep) containing burnt material and bone towards the bottom.
The altar in the middle of the open area was completely excavated. This was cut in a clay platform set into a layer with Geometric sherds; the fill inside it contained Archaic sherds and strong traces of burning.
Finds from the excavation as a whole indicate that the area was used for cult from the eighth century onwards, reaching a peak in the sixth century. The deity worshipped is unknown. The Geometric tumulus is the second of this period discovered in Argos, the first being in the stadium area in the southwest, outside the walls.
Author
Catherine MORGAN
Bibliographic reference(s)
ADelt 55 (2000) Chr, 172−74
Date of creation
2010-11-27 00:00:00
Last modification
2020-03-30 15:38:40
Picture(s) 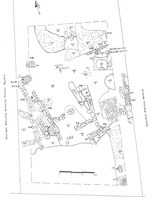 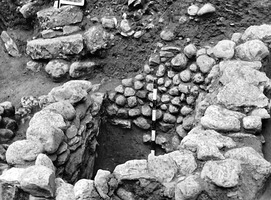