Key-words
Public area - Metal - Inscription - Hearth/Kiln/Oven - Tomb - Production/extraction site
Type of Operation
Excavation - Rescue excavation
Institution
Ministry of Culture and Tourism, Δ' ΕΠΚΑ
Toponym
Argos
Linked Record
2000
Report
Argos, 48 Korinthou Street (E. Smyrnaiou property). A. Papadimitriou (Δ' ΕΠΚΑ) reports the results of excavation in preparation for the construction of a basement.
Three walls of roughly-worked limestone blocks were discovered ca. 1.8−1.85m below the modern road surface. Fig. 1. Concentrations of blocks were also found at various points to the north and south of these walls. In the western part of the plot was a hearth oriented east-west. Immediately to the southeast, clay moulds were found in a level containing much ash and burnt clay.
Along the central axis of the plot were stone containers, roughly worked on the outside but exceptionally well finished on the interior and upper surface, covered with large limestone slabs. Container 1 (oriented north-south) was empty. A further container exactly to the east of this was not investigated because it lay on the boundary with the neighbouring property. Container 2, the third from the east, contained at least 60 bronze and two lead inscribed tablets (Fig. 2). Container 3, fourth from the east, was empty. Container 4, second from the east, contained one foot-shaped inscribed tablet. West of the containers and at a lower level, (Fig. 3) a further slab of the same dimensions and orientation covered two vessels (Fig. 4): a ceramic bell krater contained ca. 55 bronze tablets placed around the vessel wall (as were those in container 2) and a hammered bronze lebes contained three bronze vessels (a trefoil-mouthed oinochoe and two phialae) below which lay very poorly-preserved bronze tablets. A part of this collection had been removed in such a way as to cause damage to the remainder.
In the eastern part of the plot, five pottery vessels were set upright (Fig. 5). Four were covered with terracotta roof tiles and the fifth with a thin limestone slab: all were empty. The vessels are all wheelmade and of the highest quality: four are closed shapes and the fifth a bell krater. North of these vessels and at a slightly deeper level was a well-made floor of small cobbles extending over the entire area investigated (its edges were not located). This floor surrounded the pots on the southern edge of the plot as well as the vessels under cover slab 5, and was slightly damaged by container 2. At the eastern edge of the plot, by container 2, the pavement fabric slowly shifts towards gravel. Below the pebble floor in the south and west were two Geometric tombs, one a built cist and the other a pit with a limestone cover slab. Both were oriented east-west and richly equipped with Middle Geometric pottery, iron pins and bronze rings.
In sum, the stratigraphical sequence indicates an initial occupation in Middle Helladic. In the Middle Geometric period the area was a cemetery, and perhaps an aristocratic one: a well-made floor surrounded at least two rich tombs. Some while later, two vessels containing bronze tablets were sunk into the Geometric layer and covered with a slab. At the same time, a further six vessels at least were inserted slightly to the east. At some time after its deposition, the cover slab was lifted and part of the vessel contents forcibly removed, damaging the remainder. Later, a flood deposited ca. 1m of fill over the area. Thereafter, the five built containers were constructed and a hearth built immediately west of the cover slab. The terracotta moulds south of the hearth indicate its function: they closely resemble in form the bronze plaques, and both hearth and moulds must be contemporary with the containers, stone mounds, etc. The flood, dated to the fourth century, likely destroyed the Geometric settlement around the tombs. The area then fell into disuse.
Author
Catherine MORGAN
Bibliographic reference(s)
http://www.yppo.gr/0/anaskafes/pdfs/D_EPKA.pdf
ADelt 55 (2000) Chr,168−72
Date of creation
2010-11-27 00:00:00
Last modification
2020-04-03 11:00:34
Picture(s) 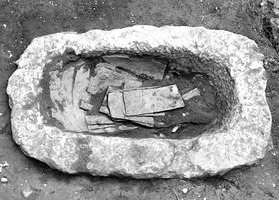 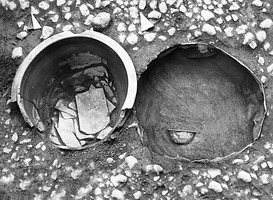 Fig. 4/ Argos, 48 Korinthou Street: the stone and bronze vessels after the removal of the cover slab. 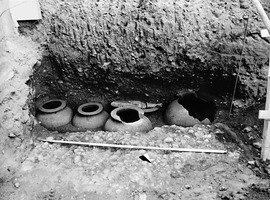