Key-words
Bath - Fortifications - Tomb - Lamp - Numismatics - Dress and personal ornament - Metal - Cemetery - Building Type - Find Type - Material Type - Site Type
Type of Operation
Excavation - Rescue excavation
Institution
Ministry of Culture and Tourism, 6th EBA
Toponym
Korinthos, Corinth
Linked Record
20002006200720082008 (1)20092010
Report
Kraneio, ancient Corinth. K. Skarmoutsou-Dimitropoulou reports a Late Roman cemetery and part of the city wall of ancient Corinth on the property of K. Katelouzou and a Late Roman bath on the property of I.A. Sophou (200m away).
Some 350m west of the amphitheatre, a 9.6m long stretch of the Late Roman city wall ran east-west (Fig. 1). The exterior face is isodomic, but the south face above the euthynteria shows patches of irregular construction. The fill is of unworked stone, brick and strong cement. The Late Roman wall, built in the early fifth century AD following the earthquakes and Visigothic incursions of the late fourth century, re-used masonry from the Classical wall and the amphitheatre. Burials indicate the presence of a planned Early Christian (fifth- to sixth-century) cemetery beside it. Three enchytrismoi in amphorae lie just outside the north face of the wall; further north were three cist tombs and one vaulted tomb in a group oriented east-west, and three more cist tombs were found at the north of the plot (Fig. 2). Coins comprise a Late Roman issue (AD 334−335), one of Theophilos (AD 832−839) and one of Romananos (AD 1067). A female burial in tomb 2 contained traces of gold thread from clothing and a gold ring. The pottery, closely datable to the fifth to sixth century, consists of LR1, LR4 and Africana I amphorae, three funerary vessels and lamps of Attic, North African and Asia Minor type (Figs 3-4).
Excavation of the Late Roman bath continued (cf. ADelt 50 [1995] Chr, 270−71; ADelt 53 [1998] Chr, 311−12). (Fig. 5). Five further adjacent rooms on the south were uncovered, with water channels and a rock-cut well. One hall, approached via two steps, contained a well in the northeast corner, a tiled floor and evidence of a complex hydraulic system in and around the east wall. Across the room ran what is probably the main water-collection channel of the complex. A tile grave with a twin burial lay to the northwest. It is clear that the main rooms of the complex lie to the south and east: these remain to be investigated. Finds include two bronze coins (of Diocletian, AD 295−295, and Manuel I, AD 1143−1180), domestic pottery and architectural spolia (Figs 6-7). 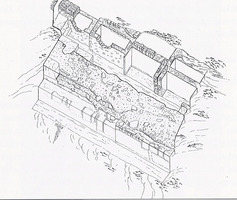 Fig. 2/ Kraneio, anc. Corinth: tombs outside the line of the wall. 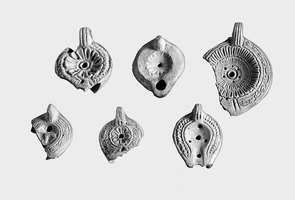 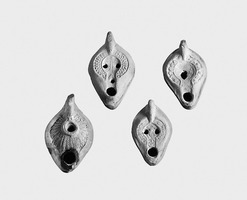 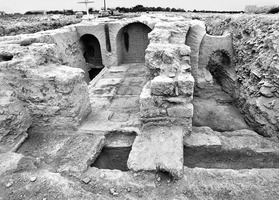 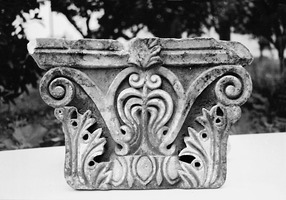 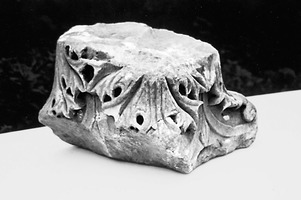