Key-words
Residence - Bone - Domestic space - Building Type - Material Type - Site Type
Type of Operation
Excavation - Research excavation
Institution
American School of Classical Studies
Toponym
Korinthos, Corinth
Linked Record
20002006200720082008 (1)20092010
Report
Ancient Corinth. G. Sanders (ASCSA) reports on the 2009 season of excavation and study in the complex of medieval and post-medieval houses in the area of the South Stoa.
Documentation of pottery from the 1960s excavations and of the standing remains in the central section was completed (Fig. 1). Later structures overlying the medieval house in the central section of the area were removed and six rooms excavated down to their construction phase (Fig. 2). The floor of the northwest room was covered with a thin sherd deposit representing a minimum of 37 Constantinopolitan White Ware pitchers. Such pitchers were frequently used as kettles for boiling water, to judge from lime-scaling and flash marks on the exterior of known examples. However, none of the pieces from the northwest room showed evidence of use, and they seem to have been kept in storage. A pit cut through the floor contained a large 11th-century storage amphora re-used in some form of industrial activity (its mouth and neck had been heated to temperatures which melted the fabric into an amorphous mass).
The well in the east room was filled in the late 13th century. It contained a mass of restorable fine, cooking and plain vessels, datable to ca. 1260−1270, and quantities of domestic animal and bird bone, fish scales, sea shells and eggshell. Among the faunal remains were the vertebra of a large tuna which originally weighed over 200kg, and the maxilla and mandible of a hoopoe (Upopa epops). The westerly of the south-central rooms originally had two large storage pithoi set in the floor. These were removed, probably in the 13th century. The room to the east had a hearth belonging to the earliest use of the house, but there is no clear evidence for cooking activity in later phases. Apart from the floors of the southwest room and the space under the stair excavated in 2008, and with the exception of the northwest room, all the domestic contexts were kept remarkably clean. The house dates to the 11th century and was modified in the 12th and especially 13th centuries. Its form is essentially that of a courtyard house with an open central court surrounded by nine domestic, storage and stabling spaces. The southern range of rooms certainly had a second storey.
Author
Catherine MORGAN
Bibliographic reference(s)
Unpublished field report, American School of Classical Studies at Athens
Date of creation
2010-11-22 00:00:00
Last modification
2018-08-22 09:24:33
Picture(s) 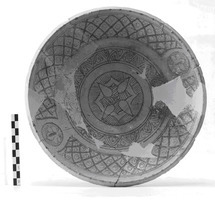 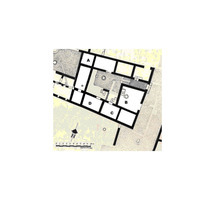