Sifaka Street, Splantzia, Chania. Aggeliki Tsigkou (KΕ’ ΕΠΚΑ) reports that a salvage excavation (Fig. 1) took place in Sifakas street in 2008, as part of the works of the Municipality of Chania aiming at the promotion of the area of Splantzia. The uncovered antiquities are the related to those that were found during the excavation of the junction of Daskalogianni and Sifaka Street in 2002.

At the west of the area, Wall 1, which comprises the continuation of Wall 8 of the 2002 excavation, was discovered (Fig. 2). The wall was covered in lime mortar and was part of the eastern limit of a building that was erected during the MM III period and was also used during the LM IA period. West of Wall 8, the continuation potentially of Wall 9 of the 2002 excavation was detected and in the same area Floor 3, which is part of Floor 9 was also excavated. On top of the floor, a conical cup was found placed upside down. In close proximity to Wall 8, parts of earthen floors (Floors 1 and 2) which belong to a later phase of the MM IIIB/ LM IA periods and are contemporary to Floor 7 were detected as well. At the East of Wall 8, a large lime pit (Pit A), as well as a pit (Pit Δ) containing a column base and pottery of the Minoan and historical periods were found. Two more pits (Pits E and Z), containing ΕΜ ΙΙΙ/ΜΜ ΙΑ and ΕΜ ΙΙ pottery respectively were discovered.

Eastern of the aforementioned pits, a strong wall with large worked stones and lime mortar (Wall 2) was excavated (Fig. 3,4,5). This wall meets Wall 3 towards the N, while both of them date to the Late Roman period. Wall 3 is partially destroyed by Pit H as well as by Wall 4 of the Ottoman period. 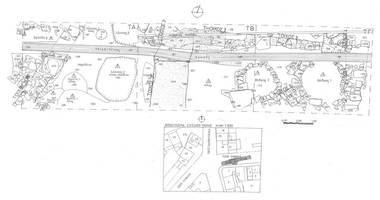 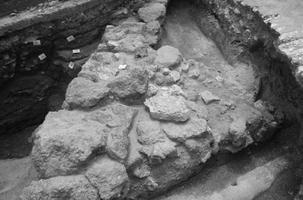 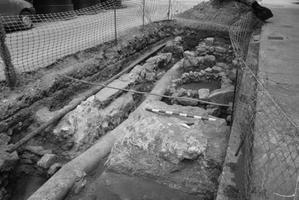 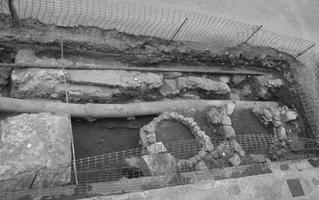 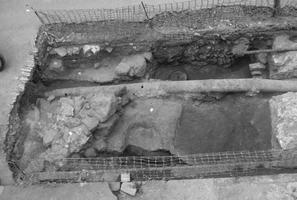