The first base was opened in the middle of the N side of the excavated area, as part of the S extension of ditch B4 of 2005 (Fig. 1).

Across the entirety of the S profile of the area, a Venetian wall (W1-025) that belongs to the NW building was detected.  Across the E side of the ditch a wall of the Minoan period (wall 4) was also found. Towards the W of the wall, a large pit (pit A) containing LM IIIB:2/C pottery was excavated. At the N of the trench , pit A leads to a surface of pressed soil with burning evidence (Floor 1).

The second base was opened at the NW edge of the excavated area, as part of the S extension of ditch Δ4 of 2005 (Fig. 2). Pit B produced a few sherds of potentially LM IIIB2:/C pottery). A layer of collapsed crude stones dating to the LM IIIC period was removed from the area S of Wall 1. Inside the layer, the rim and fragments from the body of a LM III pithos were discovered. After the layer removal, Wall 2 which creates a corner with Wall 1 was unearthed.

Various new floors and walls were discovered, while others unearthed during previous excavations (2004, 2005) were also further exposed. For instance, at the NW side of the trench, part of Wall 9 was discovered; this is cut by the external wall of the Venetian church, while it creates a corner with Wall 4, which was found in 2005 at the NE side of ditch A4. These walls are contemporary to the LM IIIB:2/C Floor 3 which was unearthed in 2004. Part of a LM IIIB/C snake-tube was found in Pit N (Fig. 3). Ditch A4 was extended approximately for 0.60 cm and towards the N (Fig. 4). Under the wall in trench A5, the older Wall 11 was discovered, whose superstructure was used as the sub foundation for the newer wall.

Works extended in some of the areas excavated in 2005, such as in ditch B8, where obsidian blades and flakes and potentially EM III pottery was collected. Ditch B6 which is located at the W side of a room with a large hearth, was extended as well (Fig. 5). The horse-shoe shaped Hearth 2, part of which was found in 2005, was fully exposed.

In ditch Γ9, located at the W end of the S road in front of House IV (Fig. 8), two pipes were removed. Underneath, a layer with a multitude of stones used for the filling of the space around the pipes was excavated, and Wall 1 was discovered at the W side of the trench. Three floors (Floors 25, 26 and 27) were also discovered, with 26 being contemporaneous to Wall 1, and Floor 27 bearing burning trances and part of a pot. Floor 26 also connects with 27, suggesting that the former was used to repair the latter.

Among the finds of the excavations, iron nails, obsidian fragments, shells, a stone grinder and a loom weight should be noted. 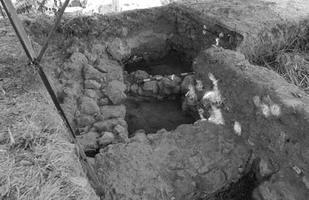 Fig. 1/ South extension of ditch B4 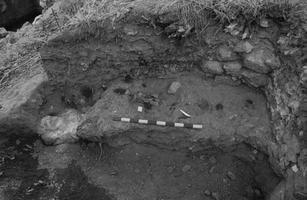 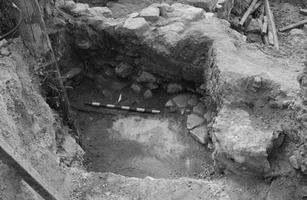 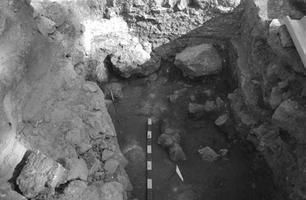 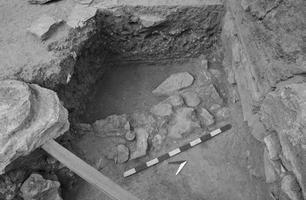 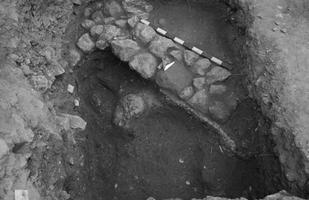 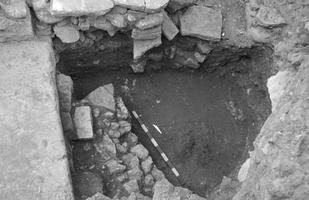