The team revisited Survey Unit 4 in the Kyparissia mine, where in 2019 a concentration of stratified lithic artifacts and bones had been located and the site was named "Kyparissia 4" (KYP-4). In the Kyparissia mine, the old sections created due to the extraction of the lignite are now flooded with water, because the groundwater level has risen up, thereby forming a lake, which now covers most of the mine's total extent. As the site of KYP-4 is located close to the shores of this lake, there were concerns that further rise of the water level would result in the erosion and partial destruction of the site. However, it was eventually ascertained that the water level did not rise; on the contrary, it was over a meter lower than last year (Fig. 1). As a result, sediments from the lower part of the local sequence, underlying the level of the KYP-4 site, were this year partially exposed. These new exposures were studied and documented photographically. Furthermore, sediment samples were collected for dating with Electron Spin Resonance (ESR), paleomagnetism and uranium series (Fig. 2). Sediment samples were also collected for the study of microfauna (e.g. rodents), ostracods, and mollusks. Microfaunal remains, such as those of water voles, serve as valuable paleo-ecological and biochronological proxies, and they are expected to offer important information about the relative age of the site. Similarly, mollusks and ostracods provide significant clues about the prevailing environmental conditions, because they are sensitive to changes, such as temperature oscillations or fluctuations in the chemical content of the water.

The fossils collected from KYP-4 consist of skeletal, cranial and dental remains, which belong to small- and large-size mammals, as well as to few birds and reptiles. In the faunal assemblage of the site, the best-represented taxa belong to artiodactyls (cervids, hippopotamids, bovids, suids), followed by rhinoceroses; a cranial fragment of a carnivore as well as a rodent mandible were also identified. The presence of cranial remains, including a fragmented deer skull (Fig. 3), indicates depositional processes of relatively low energy and occasionally good preservation conditions for the bones. This observation is supported by the preservation condition of the lithic artifacts, which, with only few exceptions, preserve fresh and sharp cutting edges (Fig. 4). A total of 19 lithic specimens were collected from KYP-4, including four pieces that may actually be natural rocks or ecofacts (i.e. of non-anthropogenic origin). Simple flakes and debitage products continue to predominate in the lithic assemblage from KYP-4, while retouched tools are fewer, as is usually the case in Palaeolithic sites and especially those that are open-air. Noteworthy are the artifacts made of grey flint and white quartz, as well as a core made of red radiolarite that bears possible traces of the bipolar-on-anvil technique, which is attested also at the site of Marathousa 1.

During the examination of Kyparissia Survey Unit 4, the team collected a coprolite, a bird ulna, remains of a cervid (cranial and antler fragments, a molar), one well-preserved hippopotamus mandible and one elephant metapodial (the latter was delivered to the team by a local shepherd).

Two survey units (Survey Unit 4 and 5) were examined in the area east of the village Tripotamos. The mine operations in this area have exposed the upper part of the lacustrine sequence represented in the Choremi Formation, namely the deposits that are stratigraphically placed into –but most likely mainly above– the Lignite Seam III. These are lacustrine, bluish grey clayey deposits, poor in organic material, which are laterally interfingered with fluvial / fluvio-lacustrine deposits of yellow sandy silts and intercalated layers of coarser-grained sands and gravels (Fig. 5). In Survey Unit 4, sediment samples were collected from a layer of yellow sands of terrestrial origin for dating with Optically Stimulated Luminescence (Fig. 6). More samples from the same layer were collected for dating with cosmogenic nuclides, whereas sediment samples for the identification and study of microfaunal remains were also taken from the underlying layer. During the cleaning of the profile before the sampling, a red radiolarite stone tool was found in the aforementioned layer of yellow sands. Due to this finding, it was decided to examine this layer in more detail and laterally follow the continuation of the section profile to the south. While examining this deposit, the team discovered a concentration of lithic artifacts and fossils on the surface of a sloped, planar profile. The new site, is designated "Tripotamos 4" (TRP-4). The macroscopic study of the sedimentary and stratigraphic data indicates that the lithics and bones are being eroded in situ from the layer of yellow, silty sands. Some of the finds, such as a deer antler (Fig. 8), were located clearly stratified inside the sandy deposit, whereas others were found half-buried on the sides of small gullies created by recent runoff (Fig. 9). It was observed that the specimens are not concentrated in the bottom of the gullies, and there were no finds from the upper part of the gently-sloping profile, which supports the assumption that the finds are being eroded in situ, instead of being transported downslope from other locations. In fact, the finds derive from a relatively narrow sedimentary horizon that is defined by two sandstone crusts, with characteristic reddish-colored streaks and black stains caused by  the oxidation of organic and inorganic materials. The lithic artifacts are made of red radiolarite, greyish-black limestone, white quartz and black flint; they are found in direct spatial and stratigraphic association with the fossils. The lithic assemblage comprises mainly of flakes, flake fragments and debris, as well as cores and retouched tools (Fig. 10). The morphological and technological characteristics of the artifacts point to a late Lower or early Middle Palaeolithic techno-complex. In general, clasts are absent from the artifact bearing horizon, but possible manuports of cobble size have also been recovered in direct association with the scatter of lithic and faunal remains. The faunal assemblage is characterized by a relatively high percentage of dental remains and antler fragments; diagnostic remains indicate taxa that belong to cervids and bovids. Fragmented, non-diagnostic skeletal elements, as well as a tooth, were collected for dating with the methods of Uranium series and ESR. In Survey Unit 5, a sample for OSL dating was collected from a sandy layer that stratigraphically underlies or correlates to the stratigraphic position of the TRP-4 find horizon (Fig. 11).

In the Marathousa mine, the team re-examined the sites of Marathousa 1 and Marathousa 2, but the survey did not yield any significant new finds. Sediment samples were collected from both localities for the study of macrofaunal remains and ostracods. 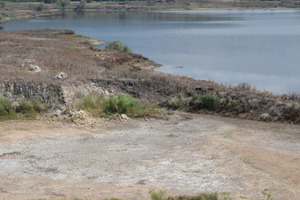 Fig. 1/ Panoramic view of the KYP-4 site upon the start of the 2020 field work and after the first cleaning of the vegetation cover. The flat, open space to the south of the site (lower part of the figure) was flooded last year Fig. 2/ Sampling the lower part of the sequence at KYP-4 for dating with the method of paleomagnetism. The samples were taken as sediment blocks of 3x3x3 cm 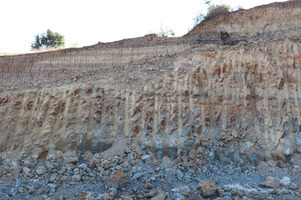 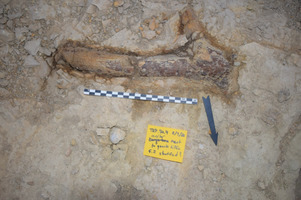 Fig. 8/ Deer antler (ca. 35 cm max. length) found in situ at TRP-4. The yellow tag lies next to a quartz lithic, whereas another lithic artifact was found lying directly below the antler 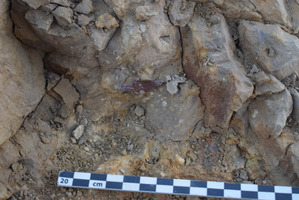 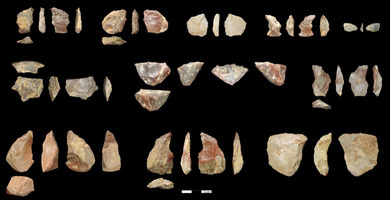 Fig. 10/ Lithic artifacts from TRP-4. The lithic in the far-right middle row, is the stratified lithic from Fig. 9 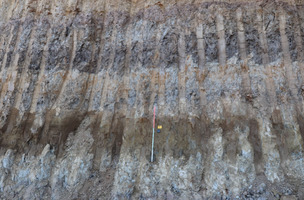 Fig. 11/ Sample taken from the sediments of the Megalopolis Member for OSL dating