Toponym
Chania, Cydonia, La Canée, Canea, Khania
Linked Record
2008
Report
22 Dimitrakaki Street (property of “K. Kalogeri A.E.”), Chania. Sofia Preve (ΚΕ’ ΕΠΚΑ) reports that the salvage excavation on this plot took place between 2007 and 2008, for the construction of a four-storey building with a basement. The plot is located at the N borders of the LM IIIA/B necropolis, and contains four LMIIIA and B graves, the dromos of a chamber tomb, a quadrilateral opening, a burial in a shaft grave, and the opening for another burial, as well as an indeterminate opening of a destroyed burial. The graves are irregularly places and were disturbed in the past (Fig. 1) .

Tomb A at the W part of the plot belongs to the rare type of shaft grave with a side opening (pit cave) and has a NW-SE orientation (Fig. 2) . The higher part of the side opening has collapsed and its interior was slightly disturbed, potentially from a rodent. The rectangular grave opening was mainly destroyed by the digger . The side opening contained the remains of a male individual, with a kylix, three arrow heads and a LM IIIA three-handled amphoriskos. At the S part of the opening a secondary burial (anakomidi) accompanied by another kylix and a bronze mirror dating to the LM IIIB period was located.

Tomb B at the S part of the plot has a NE-SW orientation. The dromos leads to a chamber with four irregular sides and a collapsed ceiling. It contained at least five individuals (3-4 burials and an anakomidi). The burials were accompanied among other finds by a juglet, two small stirrup-jars, a painted one-handled cup and an unpainted one. The burials date to the LM IIIA2-B1 periods.

Tomb Γ (Fig. 3)  is parallel to the aforementioned and has the same orientation. Its chamber is irregularly shaped and the ceiling is destroyed as well. The human remains were heavily weathered due to the humidity, while no finds were found.
The dromos of Tomb Δ was filled with pottery fragments from the vessels of the chamber. The chamber contained two anakomides and the remains of another potential burial. Some of the grave good were a LM IIIB handless cup and a shallow angular bowl with a spout, a bronze needle as well as beads from a necklace.

At the NW part of the plot, another disturbed burial, potentially of non-adults was found in a rectangular opening with a few Minoan pot sherds. A similar opening was detected under Tomb Δ, but it remained unexcavated. 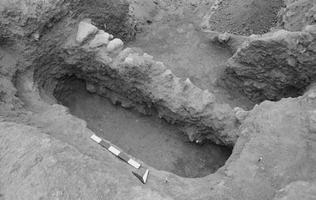