Toponym
Chania, Cydonia, La Canée, Canea, Khania
Linked Record
2008
Report
Junction of 27 I. Sfakianaki Street and Platonos Street (Malefakis plot), Chania. Efthimia Kataki (KE’ ΕΠΚΑ) reports that during the excavation for the foundations of a new house, part of the dromos of an underground rock-cut tomb of the extended necropolis of Ancient Kydonia was discovered. Salvage excavations followed in 2008, and brought to light two large underground rock-cut chamber tombs (Tombs 1 and 3), part of the dromos of a third one (Tomb 2) and an arched opening/ditch.

Tomb 1 had a relatively long dromos (approx. 15m.)  (Fig. 1) on which four successive burials with no grave goods covered with large unworked stones were located, while another one was present on the covering of the entrance (Fig. 2). Fire traces and the remains of at least one skeleton were detected inside the burial chamber, along with four vessels (Fig. 3), one seal and two stone beads. Only part of the dromos of Tomb 2 was preserved, since it has been destroyed in the 70s during the erection of a nearby building. Tomb 3 had a 10 m. long dromos (Fig. 4) where two vessels and a burial without grave goods covered with stones were discovered. The chamber contained the remains of at least four individuals, a seal, two stone beads and traces of bronze and obsidian. These tombs date to the LMIIIB period while the arched ditch at the NE part of the plot dates to the Hellenistic period and was used for the discarding of building material.

After their documentation, Tombs 1 and 2 were backfilled, while an entrance was created for Tomb 3 in order to become accessible to the public. 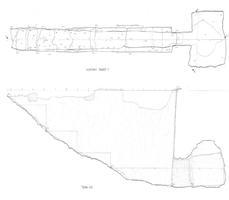 Fig. 1/ Plan and section across Tomb 1 Fig. 2/ The entrance of Tomb 1 with the stones that were blocking it

Fig. 3/ Vessels from the chamber of Tomb 1 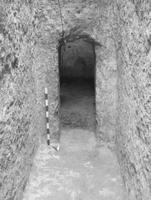