Site of Kalami, Municipality of Souda - 2007

Toponym
Kalamion
Linked Record
2007
Report
Site of Kalami, Municipality of Souda. Katerina Tzanakaki (ΚΕ’ ΕΠΚΑ) reports that in Kalami area north of the old and new National Road of Chania-Rethymno, the remains of a probable farmhouse belonging to the domain of Ancient Aptera were discovered at the property of S. Chalakatevaki-Ventouri  during a salvage excavation. During the research that took place between 2007 and 2008, parts of an ancient building dating to the 3rd c. B.C. that had been extensively repaired during the next century, potentially after a natural disaster (2nd half of the 2nd c. B.C.) were unearthed (Fig. 1).  During the early Hellenistic period the building had large square rooms and entrances, and had at least three floors, taking advantage of the natural slope of the ground (Fig. 2).  The final destruction of the building, which must have been caused by an earthquake leading to the abandonment of the establishment, dates to the 1st c. B.C., possibly around the 2nd half.

Thirteen rooms were discovered in total. Under a destruction layer inside the rooms, the tiles that were used for their construction were found. Underneath the tiles large pointed amphorae for oil and wine storage, as well as cooking pots were unearthed (Fig. 3).  Many small vessels representative of the domestic pottery types of the period such as lamps, loom weights, small skyphoi, figurines etc. were also collected (Fig. 4) .  The large stone vessels that were found are indicative of the household activities  that were taking place inside the building (Fig. 5) . A significant find of the excavation is a room that was used as a wine press, at least during the first phase of the building (Fig. 6). 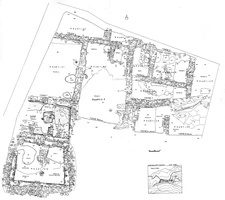 Fig. 1/ Plan of the farmhouse 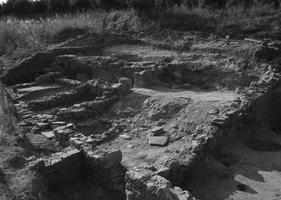 Fig. 2/ View of the house from the NW 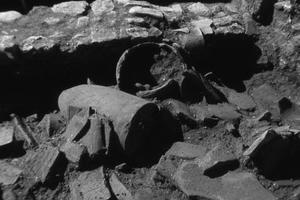 Fig. 3/ Room 10. The Dressel 1b type amphora in the destruction layer 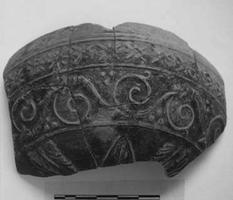 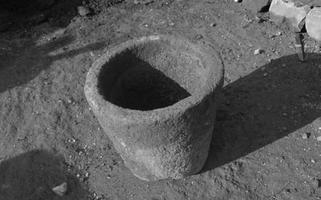