Property of St. and M. Michelioudaki, Settlement of Plakalona in Aptera, Province of Apokoronas - 2007

Toponym
Plakalona
Linked Record
2007
Report
Property of St. and M. Michelioudaki, Settlement of Plakalona in Aptera, Province of Apokoronas. Katerina Tzanakaki (ΚΕ’ ΕΠΚΑ) reports that the salvage excavation at the property took place in the beginning of 2007, following previous short investigations in 2005.  The plot is located in the N end of the west cemetery of ancient Aptera. Most of the antiquities were discovered at the N half of the property.

Sixty graves of various types and periods were found in total. The area was mainly used during the Hellenistic period. A group of 38 simple pits dug on soft stone (Fig. 1) is notable. Despite all of them being looted or disturbed, many still contained small ceramic vessels (lamps, skyphoi, unguentaria etc.) as well as bigger ones, such as those of the local «Plaketten» type (Fig. 2,3). A cluster of scattered rectangular-shaped graves, some of which were investigated in the 1960s, were detected; they also date to the Hellenistic period. It is possible that grave 40 had two levels, since a wall was built in its interior out of covering slabs, and it contained figurines, a bronze mirror as well as golden and silver jewellery. Grave 60 was the only undisturbed one, containing the skeletal remains of a young female, including golden and silver jewellery and two Hellenistic vessels as well.

During the Early Archaic period, the S part of this cluster was used for pithos burials. An anakomidi (i.e. secondary burial) was also found inside a pyre along with ceramic vessels of the early 5th c. B.C.

A wide but shallow pit was located in the same area, with other smaller ones containing small vessels and silver fibulae being nearby. The finds might have derived from earlier burials which were at some point disturbed for unknown reasons. In some of these pits the fire traces were distinct.  This context dates to the first half of the 5th c. B.C.

The use of the area seems to have stopped at some point during the end of the Hellenistic period. 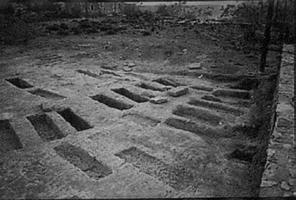 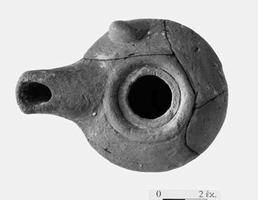 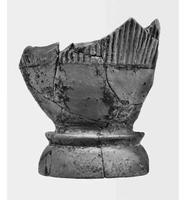