Mycenean cemetery in the area Tripes of the Kladeos village, municipality of Ileia - 2014

Chamber Tomb A (N-S) was revealed next to the cemetery’s entrance, with its entrance facing the S. The chamber’s plan was ellipsoidal and inside it the excavators found a large quantity of sherds, bronze item parts and bones (long bones, parts of skulls etc.).
The ambulatory was somewhat downward and small, due to lack of space. The side walls do not have the same height, they follow the ground’s inclination, and they converge upwards. The bigger part of the tomb’s entrance was built in dry-stone -using large stones- and was destroyed by illegal excavations. With the cleaning of the ambulatory, a large quantity of sherds and bones was procured followed by a shaft grave on the ambulatory’s W side. The grave was mostly empty due to the illegal excavations, but in the NW walls, an alabaster, a four-handled amphora, and some pseudo-nozzle amphorae were located. When the sherds were glued together they formed four four-handled amphorae, three pseudo-nozzled amphorae, and a baby’s feeding bottle. Two pits were revealed when the floor was fully cleaned (Fig. 1).

Pit no. 1: It was an ellipsoidal pit, located in the chamber’s centre, across the entrance, oriented N-S. It was covered with coarse, big stones and inside it there was a burial, once more placed N-S. The deceased was accompanied by two whorls and a bronze shaft.

Pit no. 2: This pit was E of pit no. 1, it was oriented N-E and it was also covered with big coarse stones. Its inside contained bones and a vessel which is a combination of a levis and a kyathos (λεβητοκυάθιο).

Chamber Tomb B (N-S) was located on the left side of the cemetery’s entrance. The looters had located part of its ambulatory and its entrance, which was on the S. The chamber was ellipsoidal and full of soil, due to the collapse of the dome and the walls. A large quantity of sherds, parts of a bronze item, parts of skulls, long bones, etc. The side walls of the ambulatory are not the same height, and they follow the ground’s inclination. The entrance, made of dry-stone -consisting of large coarse stones-, was destroyed by the illegal excavations.

The cleaning of the ambulatory produced a large number of sherds and bones, as well as some shells. The gluing of the sherds revealed a krater and a pseudo-nozzle amphora. In the W side of the ambulatory there was a long and narrow nook, inside of the archaeologists found two skulls (one on the S and one on the N), with few sherds. In the chamber, no burials were found in their initial placement. There was a number of bones and sherds, without any sense of arrangement, mostly on the chamber’s walls (10-15 cm above ground). It was obvious that the water that entered the tomb had lifted the grave goods. Two pseudo-nozzle amphorae were found, as well as three four-handled amphorae, one alabaster, one oinochoe, one sealing stone and five whorls. The floor’s cleaning revealed two pits.

Pit no.1: It was an ellipsoidal pit, located in the chamber’s centre, across the entrance, oriented N-S. Its inside contained bones, sherds, a kyathos with a ring handle and four whorls.

Pit no. 2: Parallel to pit no. 1, a second ellipsoidal pit was revealed, also oriented N-S. Its insides contained sherds and a processed stone.

The chamber tombs are dated in the Late Helladic IIIA2-IIIC period. 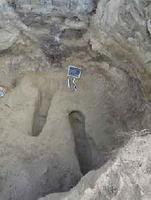