Toponym
Chersonissos, Chersonisos
Linked Record
2008
Report
Property of E. Panigiri, Chersonissos. Stella Mandalaki (ΚΓ’ ΕΠΚΑ) reports that this plot is located at the road heading from the port towards Ano Chersonissos and is nearby other properties where antiquities have been brought to light. Due to the detection of Roman graves during trial trenching, and excavation took place and led to the discovery of an organised Late Roman cemetery (Fig. 1,2).

Twenty four trenches (3×3 m.) were opened in total and 42 rectangular graves dug on soft rock were found, with half bearing covering slabs but no side walls (Fig. 3), and the rest being more elaborately made (Fig. 4).

All graves have a W-E alignment, however there is differentiation related to the typology and location in the burial ground; rectangular graves occupy the S part, while the elaborate ones the N part. It is possible that the differences in typology are related to social structure or ritual stages, instead of chronological phases.

In most graves, sloping evidence are visible on the side walls (Fig. 5), implying that an arched covering made of small stones, bricks and plaster, which is not preserved in any of them, was present.

The elaborate graves mainly contained secondary burials (anakomides) (Fig. 6) and only a few primary burials were found in the rectangular ones (Fig. 7). Some of the graves were also empty. It is possible that one of the empty rectangular openings contained a child burial, while another larger one contained a roof-tiled grave (Fig. 8).

Only a few grave offerings were present inside the graves, mainly Late Roman jugs and bronze jewellery (3rd-4th c. AD). An intact glass jug, two bronze coins, as well as a Hellenistic glass unguentarium from a disturbed deposit were also collected. The discovery of two intact bronze sistra with reliefs of figures (Fig. 9) placed in the same grave is noteworthy. 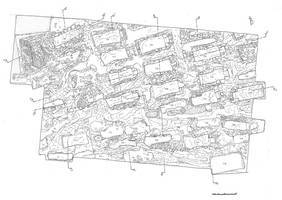 Fig. 1/ Plan of the excavation and trenches 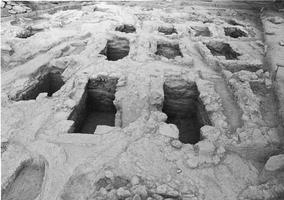 Fig. 2/ Part of the cemetery

Fig. 5/ Foundation of the arched covering of a grave

Fig. 6/ Secondary burials (anakomides) in the interior of a grave 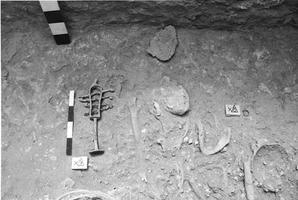 Fig. 9/ One of the two sistra in relation to the secondary burials (anakomides)