Eileithyia Sanctuary, Olympia. Georgia Emm, Xatzi (Z’ EPKA) reports on the continuation of the excavation on the Sanctuary of Eileithyia, in the building’s three inside rooms (A, B and C), while some additional trial trenches were opened as well in the surrounding grounds (Fig. 1). The excavations were held between July and October.

Room A: The removal of the soil covering the S department was completed. Some fallen architectural remains were removed as well. Part of the E wall was partly revealed, but it could not be fully unearthed due to the modern water pipe passing on top of its outside side. In the opening between room A and room B, a red clay architectural member was revealed. It was attached on the N wall and it possibly was a seme. In the NE part of the room (not excavated), a triglyph and part of an impressed clay tile with the inscription ΔΙΟΡ. A rectangular stone was located in the N side of the Late Classical wall. It bore an incised inscription, accentuated with red paint, which was of votive nature [ΑΝΕΘΕΚΕ{Ν}]. A base was unearthed in the NW corner, where the pillar which was found standing (with an inclination towards the N) was located in previous seasons (Fig. 2).
River stones, in a curved layout, were found in the NE and the SW corners. Amongst the findings were stone triglyphs, bronze coins (two from Hilyd and Sikyon) and one silver dinar, of the Trajanic era. Also, alongside the pottery, some sherds of clay figurines, parts of iron items, sherds of glass, faience etc.

Room B: During the removal of the soil in the SW, N and S parts, the findings were varied and many. Two supporting branches of an offering table were located in situ (transversely towards the W wall of this room) (Fig. 3). They were covered in white plaster and the front bore incisions. Around the branches, intense traces of fire were identified. Some deep plated dated between Late Classical and Early Hellenistic eras were located among the fire traces.
The stone that had been located in previous seasons was completely unearthed; it was an altar, located in a lower level than the offer table (Fig. 4). Around it, extensive traces of fire were identified, as well a large variety of small findings (amongst these: three bronze roosters, two legs of bronze levites, one large knife – Fig. 5,6). Apart from the large quantity of pottery, containing Roman lamps, other small findings contained: parts of clay figurines, jewellery, bronze and silver plates and parts of bronze vessels and mirrors. Parts of architectural members, parts of an impressed tile, of simple tiles, of stroteres tiles, opus sectile tiles, glass tiles and sherds of glass vessels were also found.

Room C: An intense cleaning the room, on both sides of the inside wall, produced a thick layer of ashes, as well as a large quantity of findings. The building’s foundation trench was thoroughly investigated, and the pottery found was of the Archaic Era. Other findings included black painted sherds, jewellery, iron-made items, a marble egg and an almost intact glass jug. A large number of findings was found, below a large flat stone in the W part of the room, amongst which was an 8-shaped bone pin and Archaic sherds (Fig. 7,8). It seemed that this room was a sub-layer of the building’s foundation.

In the N side of the sanctuary, a trial trench revealed few Roman sherds, as well as a destruction layer consisting of roof tiles [amongst these there was a kalypter tile, painted black (Fig. 10)]. Other Roman layers in the area were also located.

In the S side of the sanctuary, a similar destruction layer of roof tiles was located. 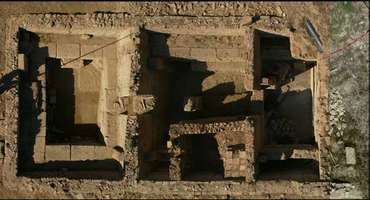 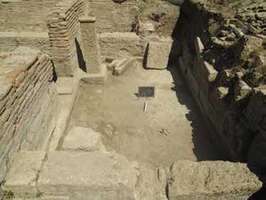 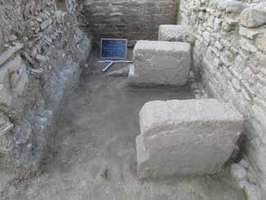 Fig. 3/ Room B, supporting branches of an offering table 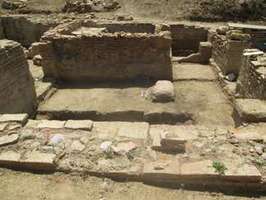 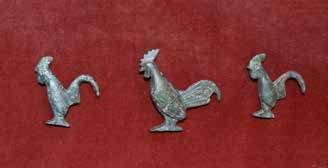 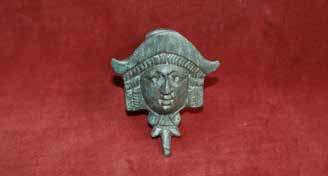 Fig. 6/ Plastic decoration of a bronze vessel, female head, from room B 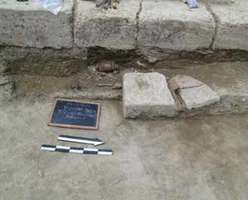 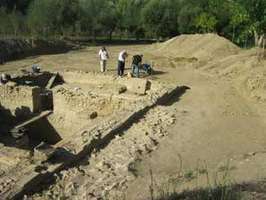 Fig. 10/ Destruction layer in the N of the sanctuary