Excavation revealed remains of a Hellenistic farm house, with three rooms and dimensions 10.10 x 11.30m. In one of the rooms (Room 3), a stone base was found (height 0.57m), and in the larges room a π-shaped structure of large limestone pieces was found, thought to be the remains of a hearth.

Remains of a cist grave were found on the side of the road, which included inside it two ceramics of the Hellenistic period. 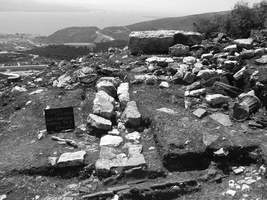