Part of a Roman agricultural facility was investigated (Fig. 1), which comprised three construction phas-es in a building 8 x 12.60m, oriented NE-SW. To exact boundaries to the E and W of the building are un-known as they remain unexcavated. The building had been covered in a tiled roof, as there was a large tile collapse layer across the whole building. Lamps and coins were found from the third and fourth centuries AD among these layers.

A large Roman farmhouse was also discovered, with dimensions 17.80 x 16.80m, with ten rooms. The building was oriented NS, and its rooms arranged in our rows. There was an extensive destruction lay-er and the walls were found collapsed. Due to the slope of the ground, the W side of the building was preserved to a height of 1.60m, and its E wall to 1.28m. The inner walls were preserved to heights of 0.50–0.80m.

The use of the rooms could not be ascertained for sure, but there are indications that this could have been a farm house, owing to the presence of storage vessels, a large millstone oil press, and animal bones. There was also a rectangular structure 1 x 1.25m made of bricks, surrounded by lead weights. The main phase of the building has been dated by coins to between the second and fourth centuries AD, and the walls of the Hellenistic building had been integrated into the Roman period one.
At a lower level, further stones and pottery of the Hellenistic period were found, in an area covering 18.50 x 11m. 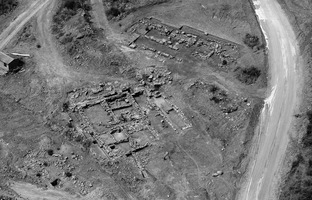