Antiquities were found towards the S boundary of the plot and on its N side (Fig. 1). Near Anapafeseos Street, two tiled-roof graves were found, and an area to the E consisting of crushed stones, pieces of tile and clay slabs. Graves 1 and 2 were both oriented EW, 1m apart from each other, with no skeletons preserved. Grave 1 contained fragments of lekythoi, and grave 2 contained a black painted skyphos or phiale, a body fragment of a lekythos and three perfume jars, two of which were grey and one was of orange clay (Fig. 2).

To the E, two more graves were found (3 and 40. They were cists, made of Corinthian tiles (Fig. 3) and located 6.5m from one another. Grave 3 contained a few sherds, while grave 4 contained a lamp, lekythos, and further fragments of lekythoi (Fig. 4). A lekythos of grave 2 and one of grave 4 belong to the ‘Agrinio group’, dating to the fourth century BC.

In the N of the plot, a destruction area was found, occupying an area 5 x 4m. It consisted of stones and tiles, and beneath three large stele bases were found made of grey sandstone (FIg. 5). They were located 1.30 to 2.20m beneath the ground. Fig. 1/ Topographic plan, plan of the excavation and sections of the graves and stele excavation 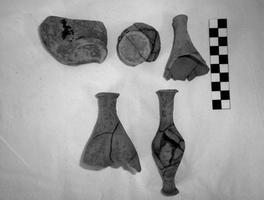 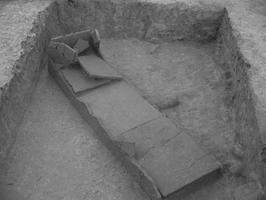 Fig. 3/ One of the two cist graves 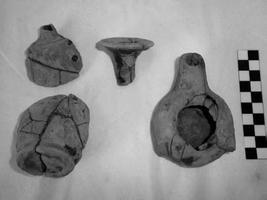 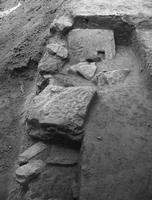