A building came to light with dimensions 13 x 9m, faced with opus testaceum (Fig. 1). The full extent of the building was not revealed. The most significant finds of the excavation included circular clay columns that were part of the hypocaust (Fig. 2), clay slabs (tegulae mammatae, Fig. 3), clay loomweights, bronze coins, iron jewellery, sherds (including a large pithos rim) and fragments of class vessels.

The finds suggest that this was a private bathhouse, and the bronze coins give a terminus ante quem of the fourth century AD. A hearth praefurnium (Fig. 4) was also located at the S end of the baths. In this area, an arched area was found, that had probably been closed in later phases of the building’s use, during which the main rectangular space of the building was subdivided with several slabs and columns. There is an opening in the E wall, leading to an area which has not been excavated. 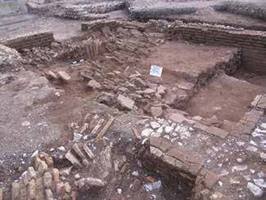 Fig. 1/ View of the excavation

Fig. 2/ Stack of clay columns, part of the hypocaust 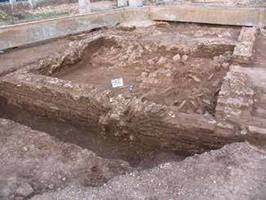 Fig. 4/ The praefurnium of the baths