Technical building “K128”, Ancient Sikyon. Konstantinos Kissas (LZ’ EPKA) reports on the continuation of the excavations at the site Ktiri, a part of Ancient Sikyon, where an underground pedestrian crossing was being constructed (K128).

The excavations revealed parts of the ancient street (Fig. 1), with drainpipes and retaining walls (N & S). This proves the existence of a main street connecting the upper parts of Hellenistic Sikyon with the city in the valley. It is oriented E-W, during the Classical period it was stone paved, whereas, during the Hellenistic period it was formed with pebbles and compressed soil. The constructions in the N of the street and the foundation of the sepulchral monument (and early Classical building) serve as retaining buildings as well.

Furthermore, around the Π-shaped Hellenistic sepulchral monument (Fig. 2), even more parts of the cemetery were unearthed, indicating that the usage was continuous between the 5th and the 1st century BC.
The sepulchral monument was dated between late 4th and early 3rd century BC, its facing towards the aforementioned street and its constructed in the opus quadratum style; part of its material were spolia. A short quadrangle was revealed in the E side of the sepulchral monument. It served as a separating space between the extensive cemetery in the N (Fig. 3) and the street in the S. Furthermore, the surface of the top stone row was equipped with tenons for burial signs or sepulchral stelai.

On both sides of the monument the excavations revealed seven graves, of which four were cist graves and three box-shaped graves. Grave no. 42 (Fig. 4) was a box-shaped grave (N-S), covered with three rectangular tiles, and it was an adult burial, in which the deceased was laid out in an extended position. The human remains were not preserved particularly well, and the grave goods were many and of luxurious nature; bronze mirror (by the left shoulder), two lydia, one pyxis with lid, one bottle, one lychnos (oil lamp), one shell, six perfume vessels, one handle of an iron item, six bronze rings, six bronze pins (by the feet), one lopas (plate), bronze earring (right side of the head), and one bronze danaki (coin accompanying the dead) (raised).

During the first excavational period (1966) four hellenistic graves were found and five bases for the placement of sepulchral stelai were unearthed in the N of the quadrangle.

On the E side of the quadrangle signs that indicated the existence of other sepulchral monument(s) were revealed, inside the cemetery. Twenty three architectural members of a monumental building were also found in the same area, which ought to be an accumulation space (Fig, 5), after the destruction of said building, either caused by man or by nature. The aim of this accumulation was probably the recycling of the architectural members. One of them was a stele, with the inscription ΤΕΙΜΑΓΟΡΑ Α..ΕΙΑ. 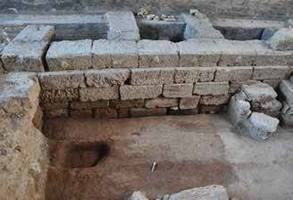 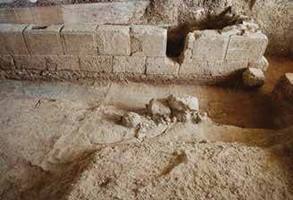 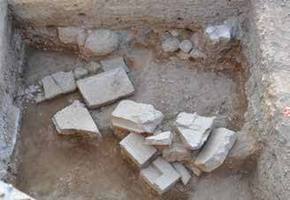 Fig. 5/ Accumulation of architectural members, E of the monument