Port of Hersonissos (Limenas Hersonissou), Property of A. and Aik. Faitaki - 2007

Toponym
Limin Chersonisou
Linked Record
2007
Report
Port of Hersonissos (Limenas Hersonissou), Property of A. and Aik. Faitaki. Stella Mandalaki (ΚΓ’ ΕΠΚΑ) reports that the property of A. and Aik. Faitaki (286.17 square metres) is located in Daidalou Street at the port of Hersonissos. A salvage excavation took place there after the request of the landowners for the construction of a building, due to the fact that the plot was near other properties, in which antiquities were found. The excavation was held in the winter of 2007 and brought to light architectural remains of the Early and Late Roman periods, as well as the remains of a probable road.

Twelve trenches, 3×3 m. were excavated in total, bringing to light fragmented walls and finds that do not comprise well-defined spaces (Fig. 1,2,3). The most characteristic architectural structure is an elongated wall, extending all along the plot with a W-E orientation. This wall defines successive deposits of pottery and building material that extend towards the N and are sealed with four successive earthen floors. It is possible that this structure was part of a road, a hypothesis supported by the discovery of the destroyed wall 4, which was potentially the north retaining wall of the road, parallel to wall 1.

Walls 2 and 5 (Fig. 4) are contemporary to wall 1, which dates to the end of 2nd and the beginning of the 3rd c. AD, based on the collected pottery.  A floor was detected in relation to the walls, underneath which pottery discharges covering an older building phase including walls 6, 7 and 8, were found (Fig. 5). These walls, as well as part of a destroyed cobbled floor and three successive, but not contemporary built pipes, date to the Early Roman period (Fig. 6). The oldest pipe extends towards the NE, N of the elongated wall 1 (Fig. 7).

The use of the road continued to the Early Christian period, according to the discovery of a golden coin with the portrait of Emperor Zeno (474-491 AD), which was found among other artifacts, such as 29 bronze coins, fragments of glass vessels, bone fibulae, a bone spoon, two marble statue fragments and part of a marble grindstone. 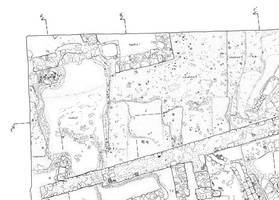 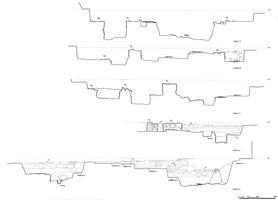 Fig. 2/ Trenches of the excavation 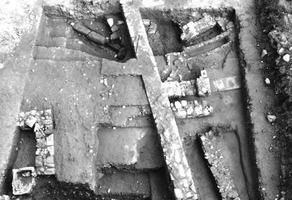 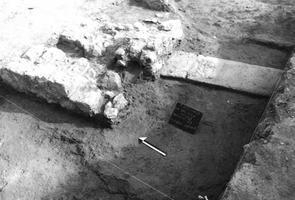 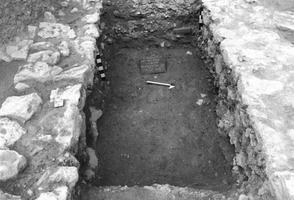 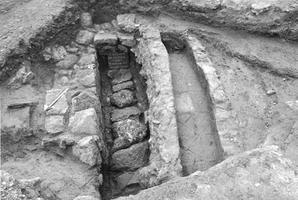 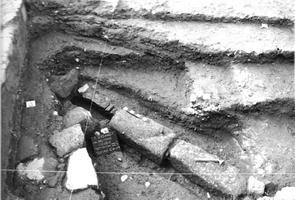 Fig. 7/ Course of the oldest pipe towards the NE, north of wall 1. The successive floors of the outdoor structure are visible in the background