Toponym
Kokkinorrachè
Linked Record
20142014 (1)2014 (2)
Report
Kokkinorachi, Corinth - Tripoli - Kalamata Highway, Lektro - Sparta section. Evangelia Pantou, Evangelia P. Eleutheriou and Maria Florou (5η EBA) report on discoveries made during the construction of the new motorway.
A building was discovered here, rectangular in plan with dimensions 6.20 x 5m. It is divided along the EW axis into two separate spaces, which are in turn subdivided into three rooms. The surviving height of the building is 0.40m. Pottery and a coin of the early Byzantine period were identified during the excavation. 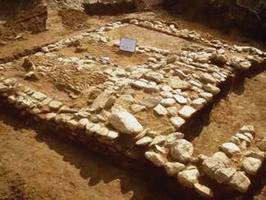