Toponym
Kokkinorrachè
Linked Record
20142014 (1)2014 (2)
Report
Kokkinorachi, Corinth - Tripoli - Kalamata Highway, Lektro - Sparta section. Evangelia Pantou, Evangelia P. Eleutheriou and Maria Florou (5η EBA) report on discoveries made during the construction of the new motorway.
The remains were discovered of a Byzantine period production centre for ceramic building material. A kiln was found in the E part of the building, which was rectangular, had a lower firing area, and its walls were made from bricks. No finds were found associated with the kiln. Fill removed during the excavation of the nearby rooms contained bricks and tile, presumably fired in the kiln.
To the W, a large rectangular building complex was discovered, 46 m x 22m. This included both indoor and courtyard spaces. Earlier architectural remains were also found to the S and E, including a small two-aisled building (8.95 x 6.90 m), oriented EW. Its masonry was faced with plaster, and its finds dated to the late Roman period. Pottery was found of both the late Roman and early Byzantine period, including glazed ceramics. Metal objects were also found, and bone and small bronze objects, glass vessels, and architectural marble pieces.
It is thought that the production centre was in use between the tenth and twelfth centuries AD. 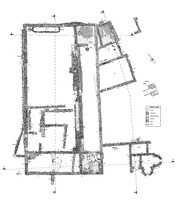 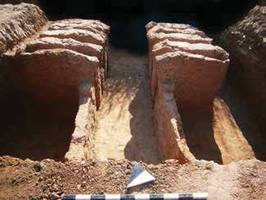 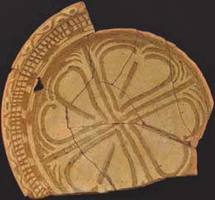