Toponym
Voutianoi
Linked Record
20142014 (1)2014 (2)2014 (3)2014 (4)2014 (5)2014 (6)
Report
Ekklisies, Corinth - Tripoli - Kalamata Highway, Lektro - Sparta section. Evangelia Pantou, Evangelia P. Eleutheriou and Maria Florou (5η EBA) report on discoveries made during the construction of the new motorway.
Excavations at this site was carried out in three sectors: N, S and W, revealing antiquities dating between the late Classical and early Byzantine periods. At least eight buildings were found.
Three buildings were located in the N sector (A, B, Γ), two in the S (Δ, E) and three in the W (ΣΤ, Z, H). The buildings in the N sector had been covered in tiled roofs, destroyed by fire. Finds from the area included unpainted pottery, clay lamps, sections of two bronze weapons, and a local bronze coin dated 223–222 BC. Marble spoila were found in secondary use in early Byzantine walls. This area is thought to be a large settlement in the late Classical and early Hellenistic periods, and also (as indicated by a large number of figurines) a sanctuary to Apollo Pythaeus.
Buildings in the N and S sectors were dated to the Roman period, with pottery and coins dating between the first century BC and the fourth century AD. There are also remains of a monumental building dated to the secondary century AD, later incorporated into an early Byzantine complex. It is rectangular in form, with dimensions 10.90 x 9.80m, preserved to a height of 1.66m. Inside, there were dive niches, and a central mosaic decorated with geometric patterns. In four of the niches were funerary remains, including three marble sarcophagi. Five tile-roof graves and a pit grave were found in the surrounding area, oriented NE. The burials inside them were disturbed, with a few Corinthian lamps found associated. Inside one of the sarcophagi was a skeleton; a lamp of the first half of the third century AD probably dates the burial.
In the S sector, remains of a building were found with dimensions 16.50 x 12m. It follows an earlier construction (building E) of the late Classical / early Hellenistic period. Inside were two rectangular masonry structures, one of which was a water tank. Ceramics and coins were found of the second to fourth centuries AD. Two further construction phases in the end of the fifth century and beginning of the sixth century are evident, during the later a cluster of graves is also dated, found on the border with the N sector. Graves are oriented EW (except three graves: 1, 4 and 7). Bones were recovered from graves 5 and 6. The Byzantine period building nearby had various symbols on its marbles, indicating it was associated with Christian funeral and worship. A second cluster of graves was found nearby. Excavation in the N and W sectors yield some pottery of the fifth and sixth centuries BC, and some architectural members.
The building found in the N sector contains six rooms. Room 1 was for storage, while there was a lime kiln in Room 4, where spolia and other stones were found. The entrance to the complex was through two doors on the S side. Room 7 had two levels, one for wine making / storage, and the other was a living space (most likely a triclinium). North African ceramics of 530–80 AD were found here, along with 14 bronze coins (Justinian I, Justin II and Sofia, covering the period 539/40 – 573–4). In Room 8, there was a semicircular hearth with a clay base. Ceramics, metal and glass objects, and coins were found here.
The building complex in the S sector was rectangular in plan, 20 x 18.50m, with a maximum surviving height 1.70m. There were some architectural remains of the Hellenistic and Roman periods, and to the E a cluster of graves dating to the fifth and sixth centuries AD. In the W sector, in contact with the retaining wall, a well was found, connected to a built pipeline. It was found filled with roof collapse, charcoal, and fragments of storage vessels. 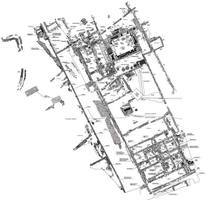 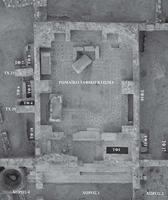 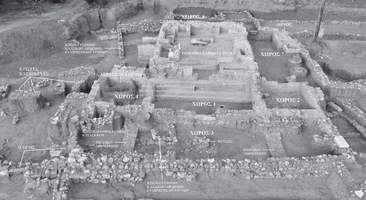 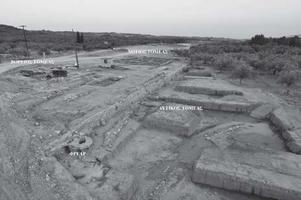 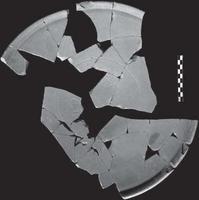 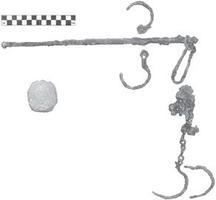 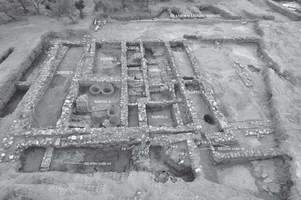 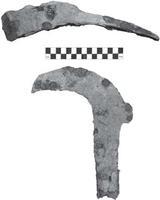